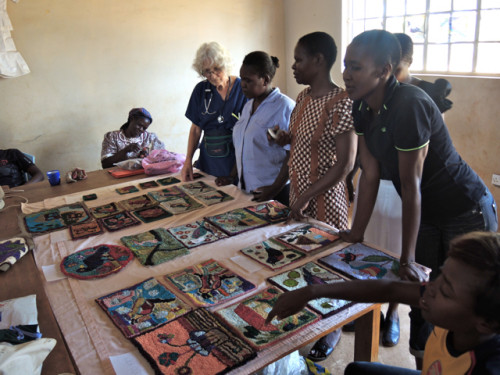 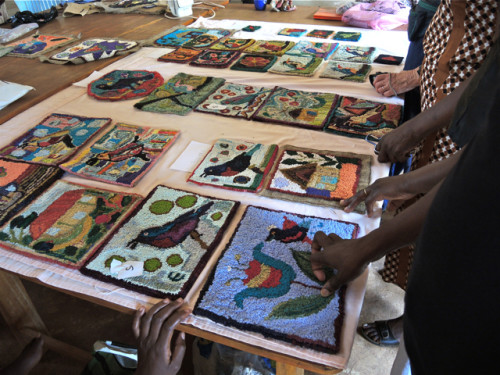 Jill commented on the last post that it must be ‘quite an adjustment returning’ to Canada after a month in Kenya. It is. And I will write more about my 5 days in Amsterdam after Kenya, a key part of the adjustment for me. For now, I have been mulling over the achievements of the 14 women who spent three weeks hooking and, in addition, their impact on me.

Above are pictures of our sale on the final day of the course. Employees at the local medical clinic and the local school came to admire and purchase. We sold several pieces. There were more pieces in addition to those pictured, including an order of six chair seats. This is a remarkable achievement for 14 women, half of whom had never hooked before.

A few words on the process:  I brought a large duffle bag full of donated linen, t-shirts and woollen strips. While in Nairobi, I was able to purchase 10 additional yards of burlap and some cotton jersey remnants from a t-shirt factory. After the second week, we went to the local market in Bondo and purchased a large bag of second-hand t-shirts, especially in the colours of sky and grass–we were running out of materials!

There were two classes, morning and afternoon. Everyone began hooking a small mat, either a flower or a heart, to establish standards both for hooking and for finishing. Everyone then went on to hook one of the local birds from a photo, tracing the image on to the backing, using the window as a light box. From there, once the first two pieces were completed to an acceptable standard, the rug hookers designed their own mats and chair cushions.  The experienced rug hookers–those who had hooked last year–took to the challenge quickly and some completed five or six pieces in the three weeks. And there were a few new rug hookers who completed wonderfully creative pieces, while others stayed with the original two pieces.

I loved sitting hooking with these women. Some sang quietly as they hooked, others chatted and laughed, but there was always an atmosphere of cooperation and achievement. As the time went on, they became more daring in their designs, drawing their interpretation of the world around them. I would often be surprised when one of the rug hookers would arrive with an almost completed piece which she had begun at home. Tomorrow I’ll write about what I learned about design and colour from these wonderful rug hookers.

Below, buying t-shirts at the Bondo market. Vendors often have their wares spread on the ground on a tarp. Bondo is a 7 km boda boda (motorcycle) ride on deeply rutted, dusty roads. Three adults and a couple of baskets on a boda boda is commonplace–and I am always relieved when we arrive safely. 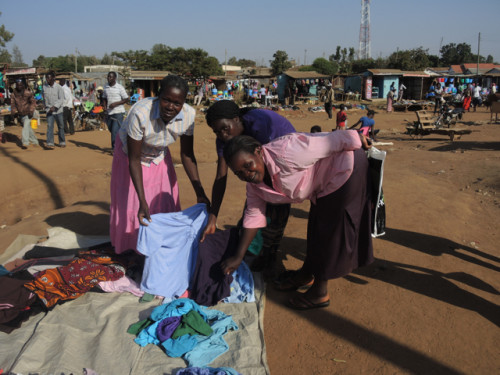