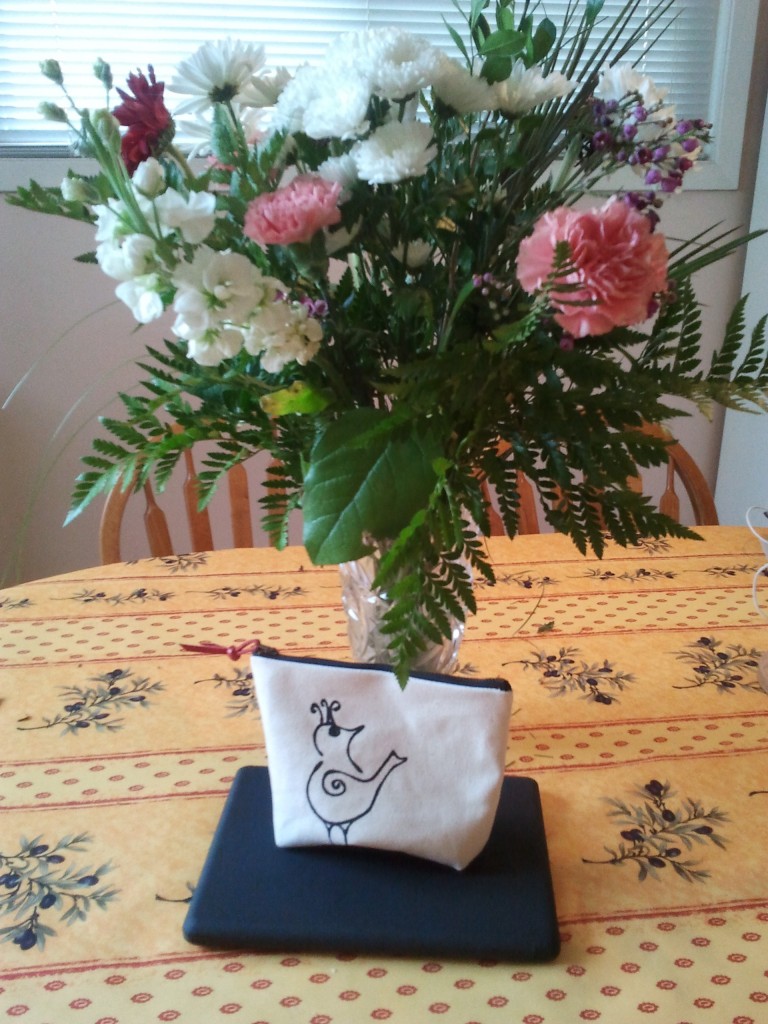 I received a lovely note and photo from Cathy in Toronto who won the pouch in the anniversary draw. It arrived on her birthday–what luck!  This photo reminds me of the gnome in Amelie–that pesky bird with attitude can show up anywhere! The pouches are sold out in the store right now, but I will be making more. Hit the online store button on the right to see what is available or leave me a note in the contact section if there is something you would like.

I was in the city for a couple of days. Went to the One-of-a-Kind show on Good Friday–crazy busy–but did find some great things. I’ve said here before that I try to buy only second-hand or hand-made–and this is a great place for hand-made. Goodies below: a new wallet from Rimanchik and tube scarf in organic cotton from Katie Walker — and my must visit — Lousje and Bean. They have a brick and mortar store in St. Catherines, but it’s always fun to see them at the show. Their designs, fabrics and craftsmanship are tops. 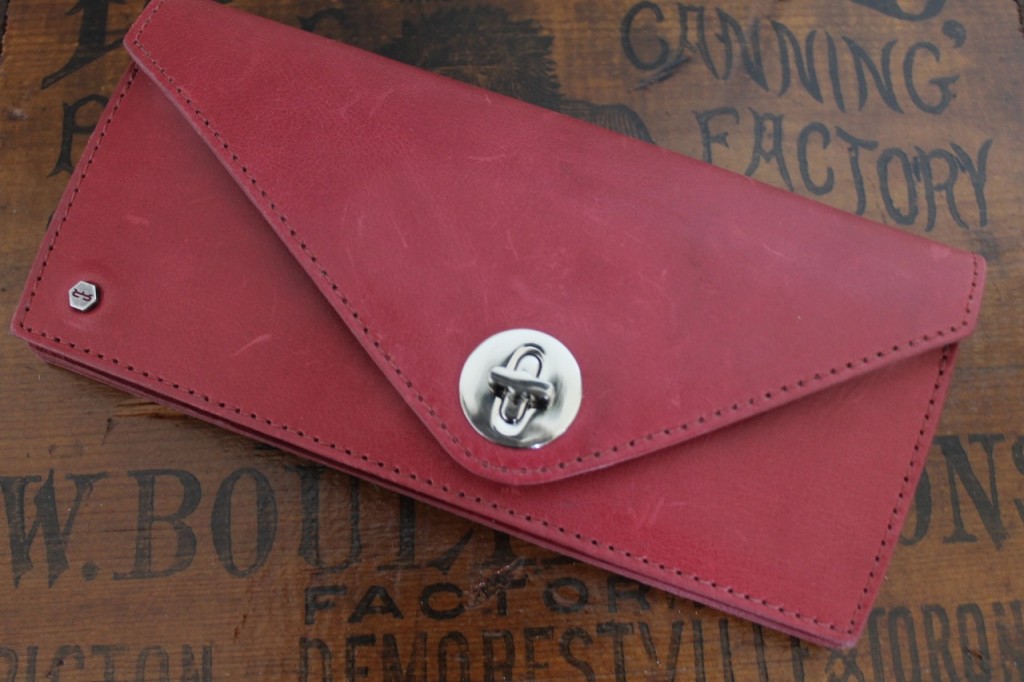 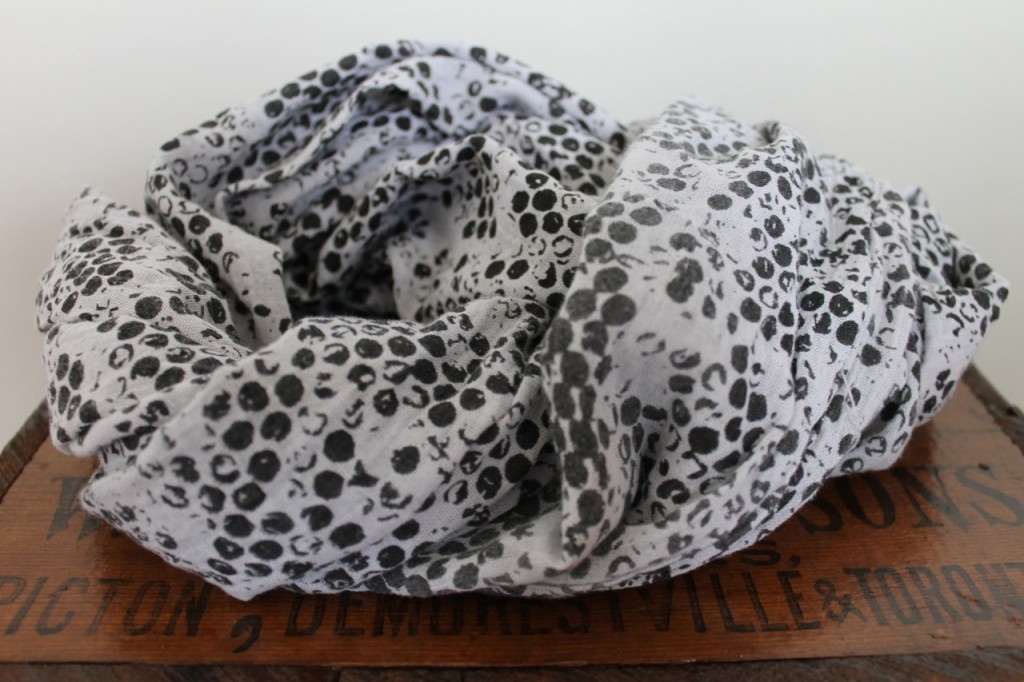 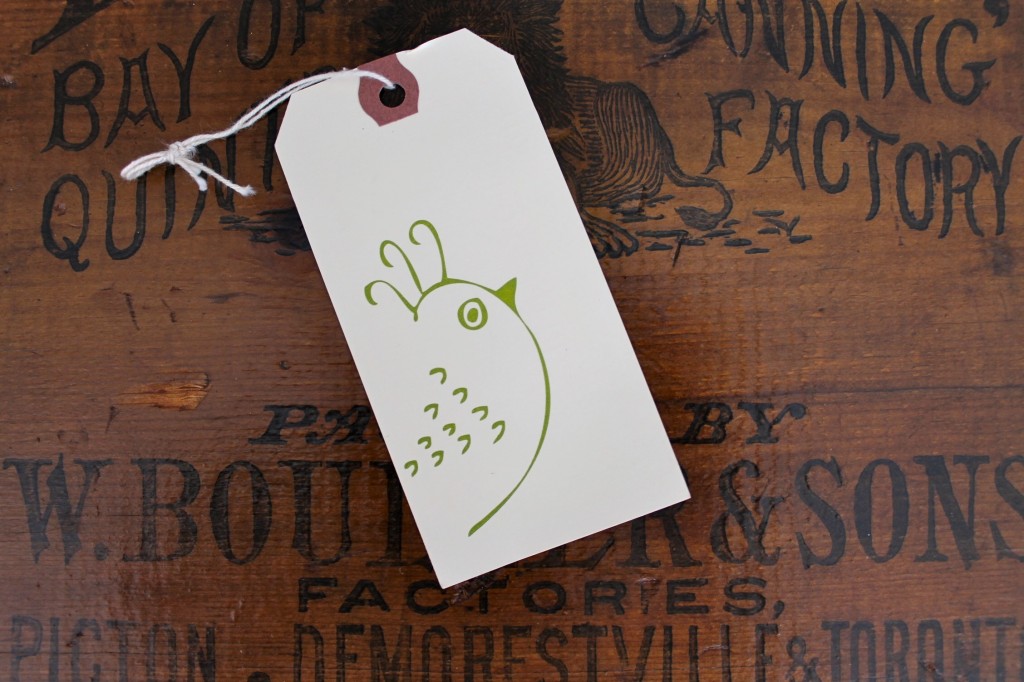 It’s still a work-in-progress, but the Birdbrain On-line Shop is officially open.  You can click on the shop button at the top left of this page and you will be taken to the on-line store where you can see all I have for sale–in three views–and buy using paypal if you choose. Or just have a look around and write to me with a request or idea.

To celebrate the opening of the online shop and the birdbrain blog 2nd anniversary we are having a give-away. Below are some of the Bird with Attitude canvas pouches fresh from the studio. These pouches are made of heavy grade canoe canvas, screen-printed with my bird and lined with a red, blue and yellow cotton print from the market in Bondo, Kenya.  Leave a comment on this post or any post this week to enter the draw for this pouch. The draw will be made Friday 22nd at 5pm. 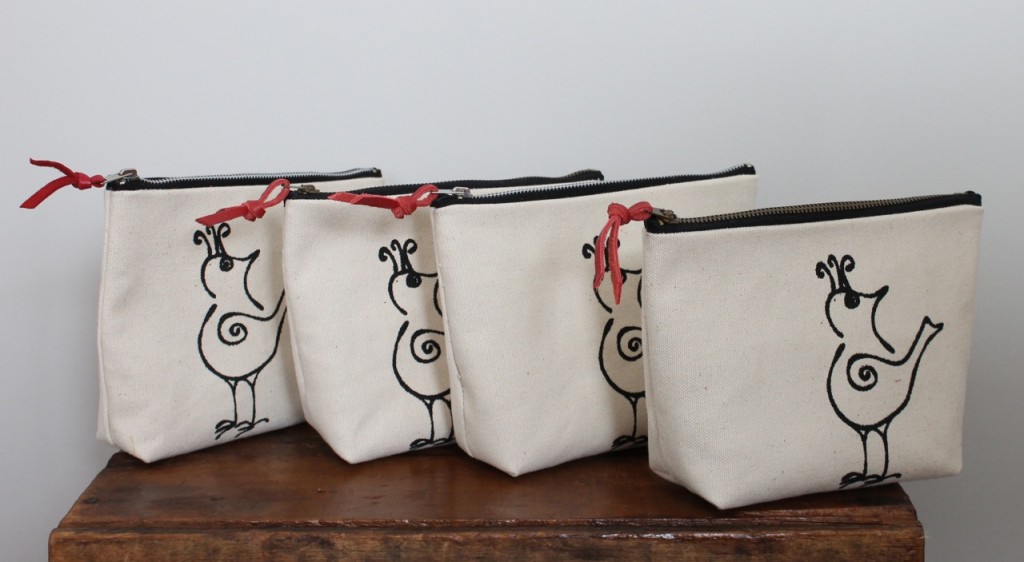 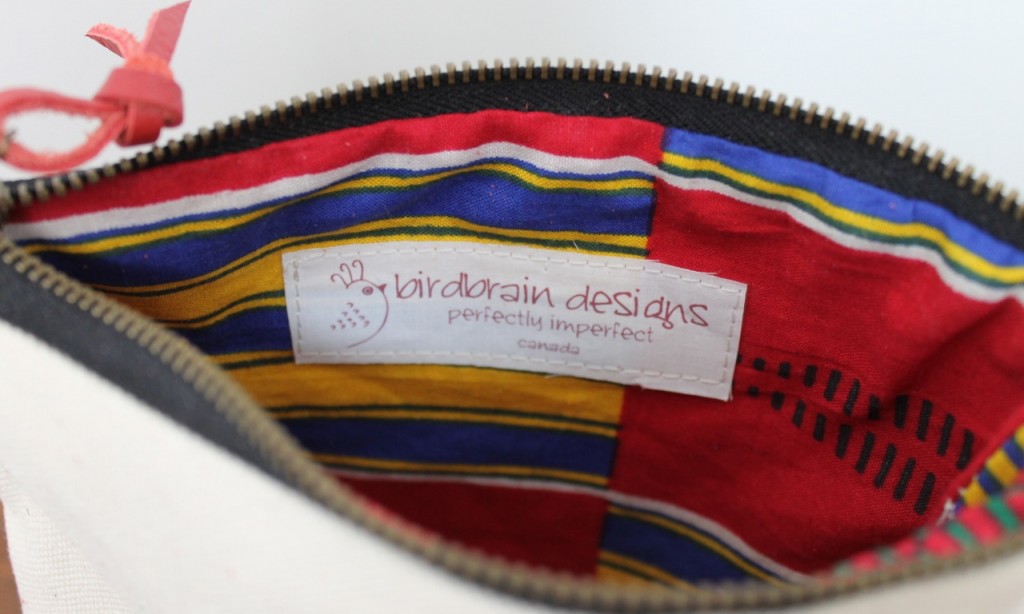 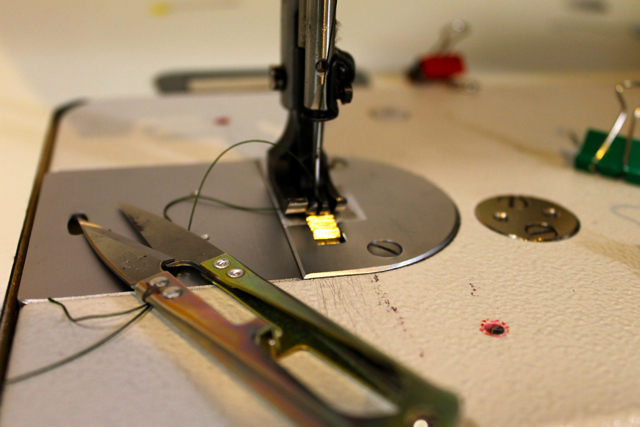 It’s a cold and dreary morning in southern Ontario and my train plans to TO for supplies were literally derailed (after I got to the station for 6:10 am and was actually sitting on the train). So I am here again in the studio this morning. I often make lists of good things in my sketchbook, as reminders–and since I have some good ones to share, I thought I would do so right here.

1. The calm following the Kenyan election.  Raila Odinga is taking his accusations of vote rigging to the Supreme Court and everyone is calling for peace. I had a text from my friend Jackie in Bondo who tells me they are all waiting on the court’s findings.

2. This inspiring interview with the Nobel prizewinning authors of Half the Sky.

3. This amazing film and this one–both of which I saw at our recent AMAZING Docfest.

4. This book . I read it in Matangwe on my ipad under the mosquito net! Thanks to Mary Anne for recommending it.

7. This article on shibori dyeing.

8. This shop. Below you will see all the coloured leather I bought there yesterday. 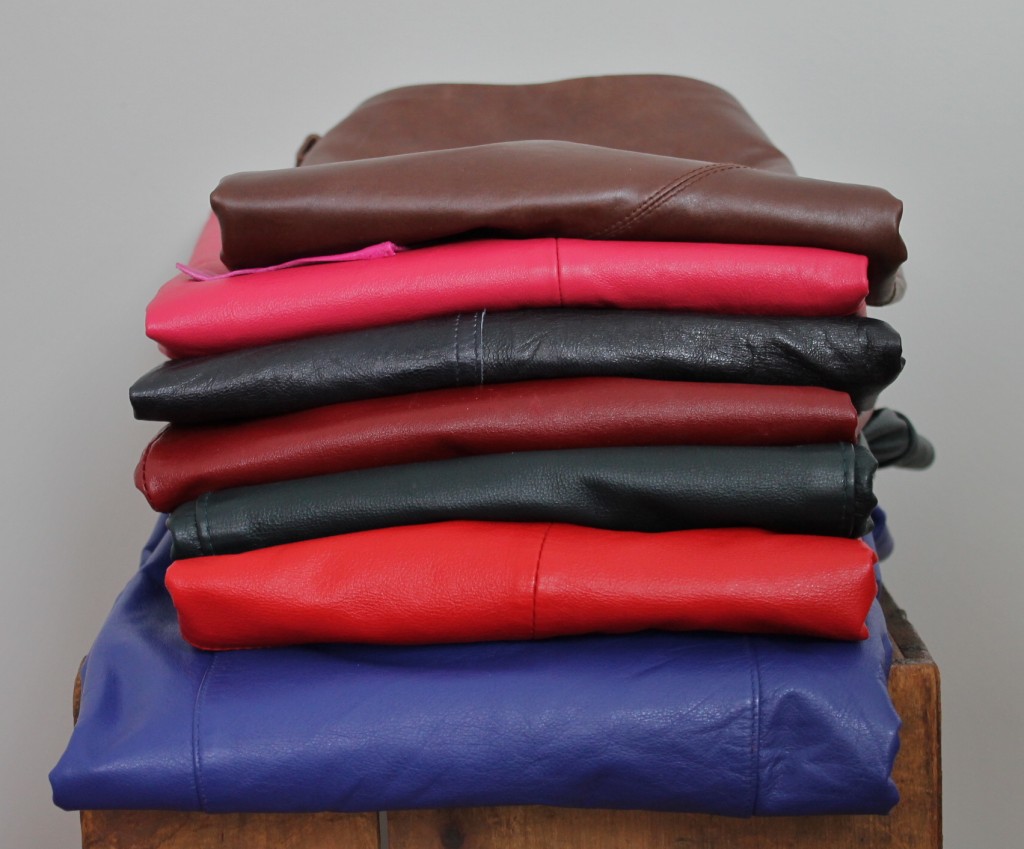 9. A new project. A large travel tote in green leather. The Delta Tote. 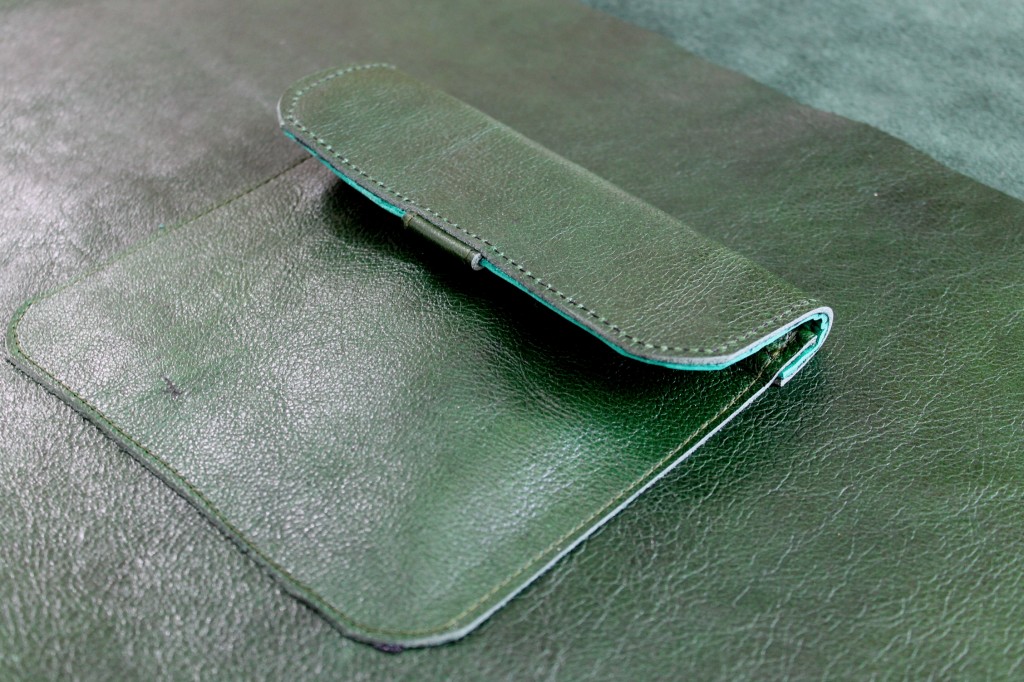 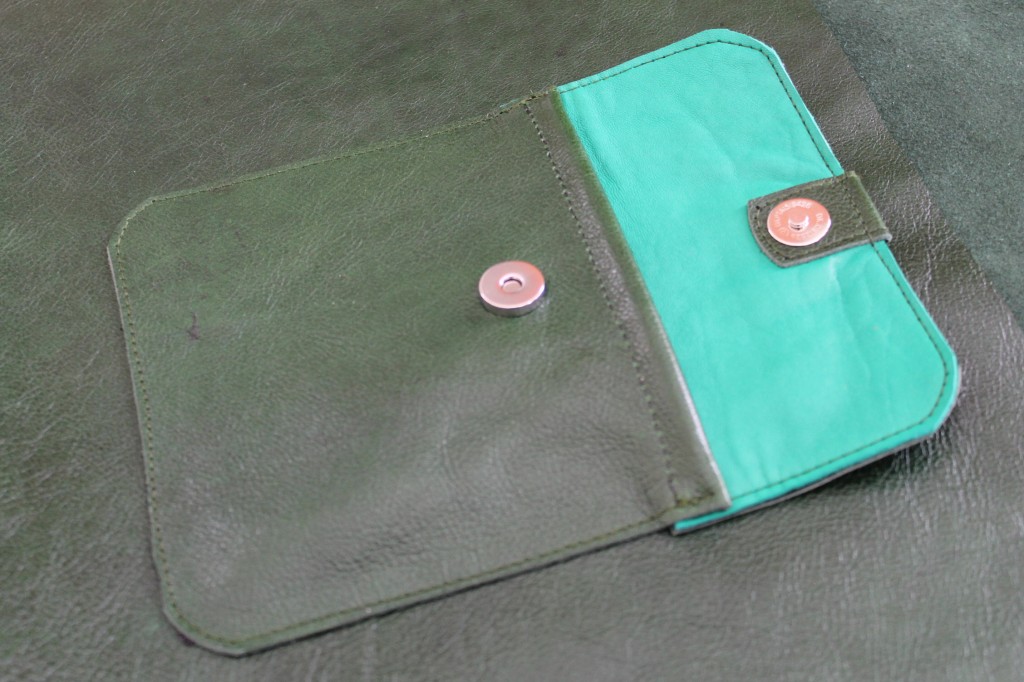 10. Birdbrain blog anniversary at the end of the month. To celebrate a new shop and a giveaway. More on this early next week.

Thank you for the comments about my sprained ankle. Things are improving on that score, and I have enjoyed extended reading and hooking time, and lots of sympathy.

We had our wedding rug consultation and all are in favour of the style of chair seat #2 with cartoon birds dotting around the rug on roof tops and chimneys. We thought if would be fun if the birds were identifiable. OB bird would definitely be in motion! We also plan on a border, so I experimented with the ground in this chairseat to try out a circle border–and I think I like it. It ties in the various colours of the rug–and I love the interplay of dark tweeds and plaids. I’ll be dyeing more of these, so will share the process. One more chair seat to go to work out the last ideas.

And I heard from Elizabeth–her blogiversary prize bag arrived and she took some photos. Check them out here. 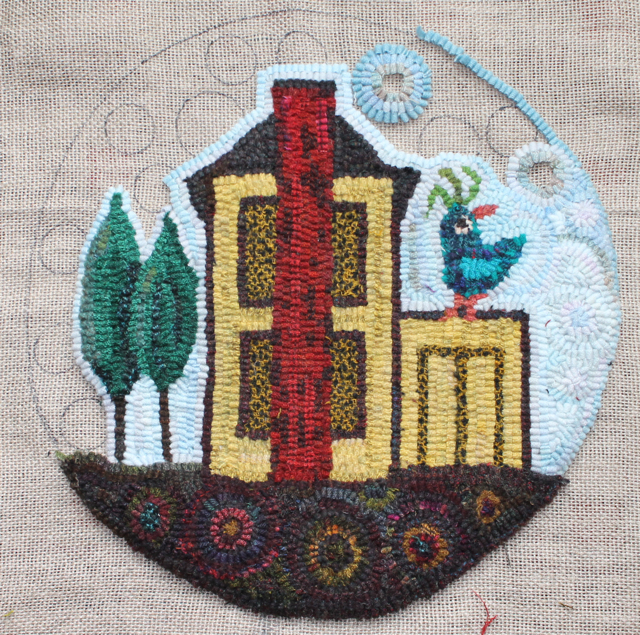 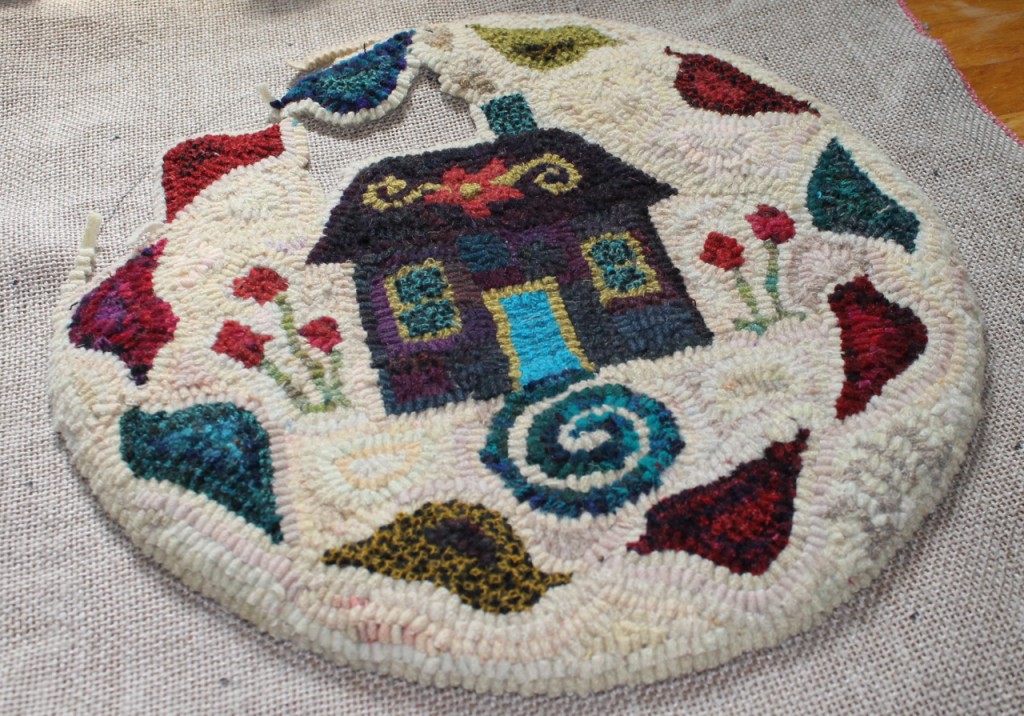 The first chair seat in the series is all but done and I am very happy with the results. The next one will reverse the colours so it will have a dark background and also will be more fanciful. I am working up to designing the wedding rug with its three houses and winding paths, and of course birds.

I have begun to update the shop and have added the fuchsia bag, the first one I have made this year. It’s a nice one–check out by clicking the shop button on the top left. I was thrilled with the results of the draw and sale–the few bags that were left have gone to good homes.

The blogisversary draw was won by Elizabeth. kittycafe.typepad.com, and she chose the small black shoulder bag featured in this post. It will be in the mail to her shortly. Thanks again to everyone for your participation.

I’ve given myself a deadline for whipping Fireworks–two weeks today. There I said it! It is so much more fun to hook on a new project, but I need to get it off my list and on the floor!  So hold me to my promise!

Thank you all for writing to me to help me celebrate my blog anniversary. You exceeded all my expectations! And I loved reading all your comments. I usually get one or two comments–but this time there were 45 lovely notes to read.

My husband chose the winning number–and it is Elizabeth!  Now, I don’t know Elizabeth, but I have been reading her blog this morning since her name was chosen and I like it very much and look forward to talking to her. I will share the blog and let you know what she chooses once I have been in touch.

Enjoy this lovely day. I’ll be back tomorrow with more information and an update on my chair seat.

A BIG thank you to  everyone for your wonderful comments! We have broken all previous records for visits to the site. This is so exciting–and you have until March 28 to comment–either to this post or to the March 15th post. All names will go into the draw.

Owen, my great advisor and supporter, is working on an on-line shop and a sprucing up the blog. So be on the look-out for that. In the meantime, here are a few other pieces for purchase or choice for the draw.  If you are interested in any of these bags or pouches, please contact me at xine@birdbraindesigns.ca and I will be happy to give you all the details. 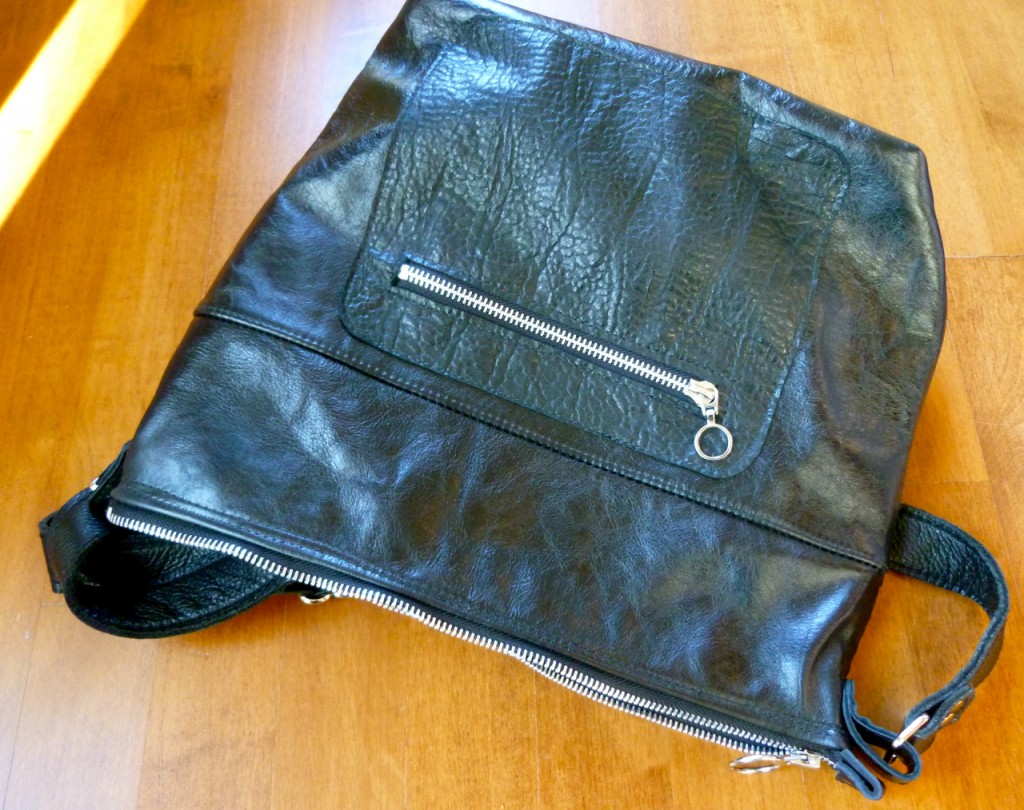 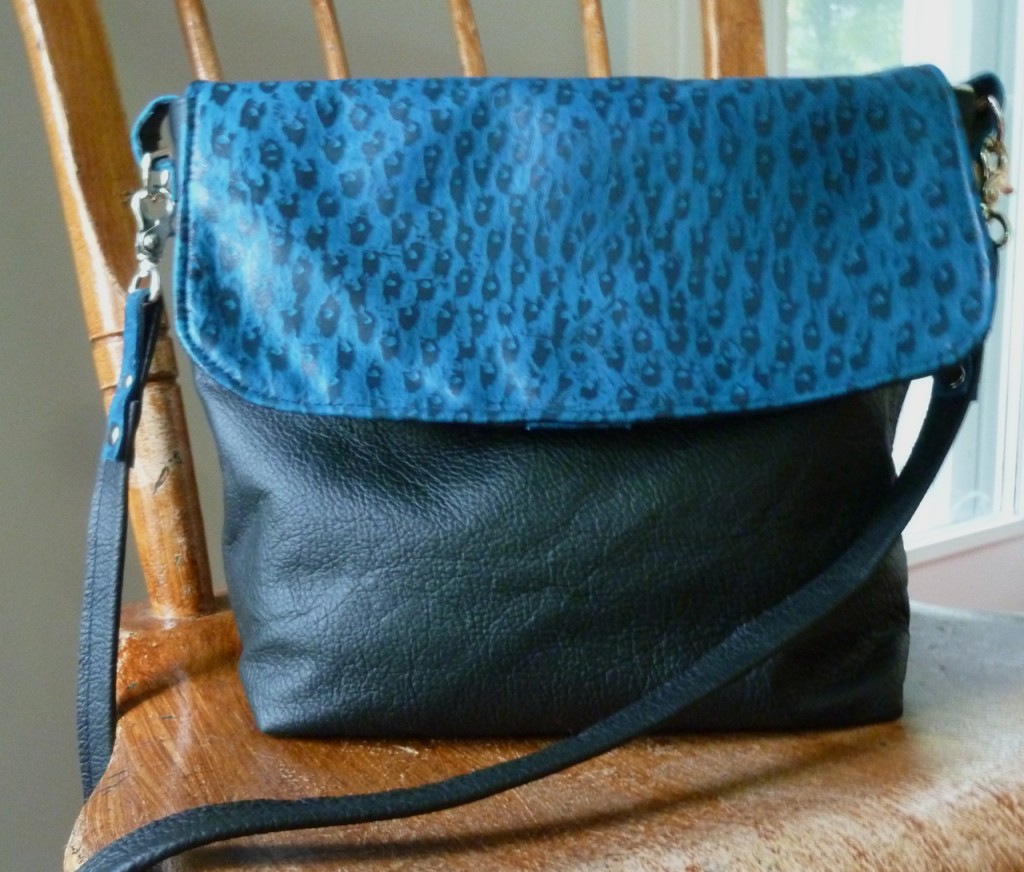 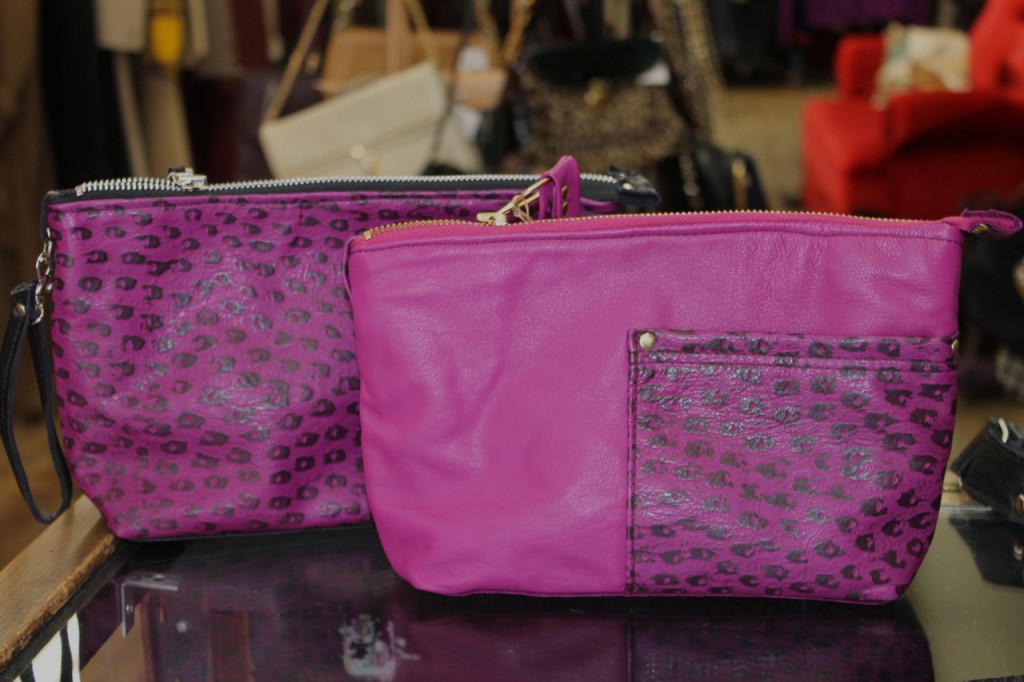 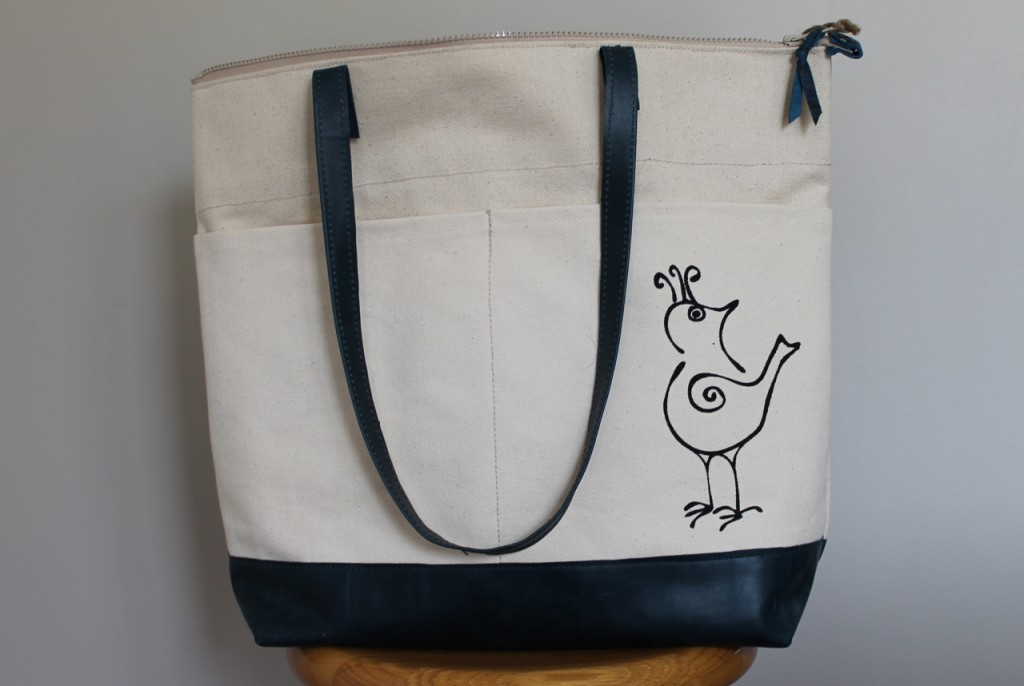 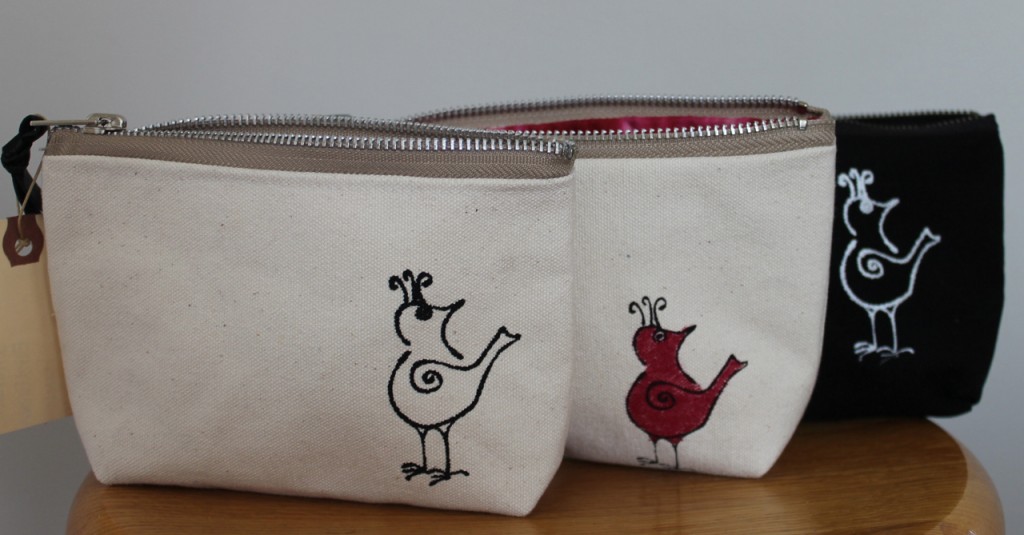 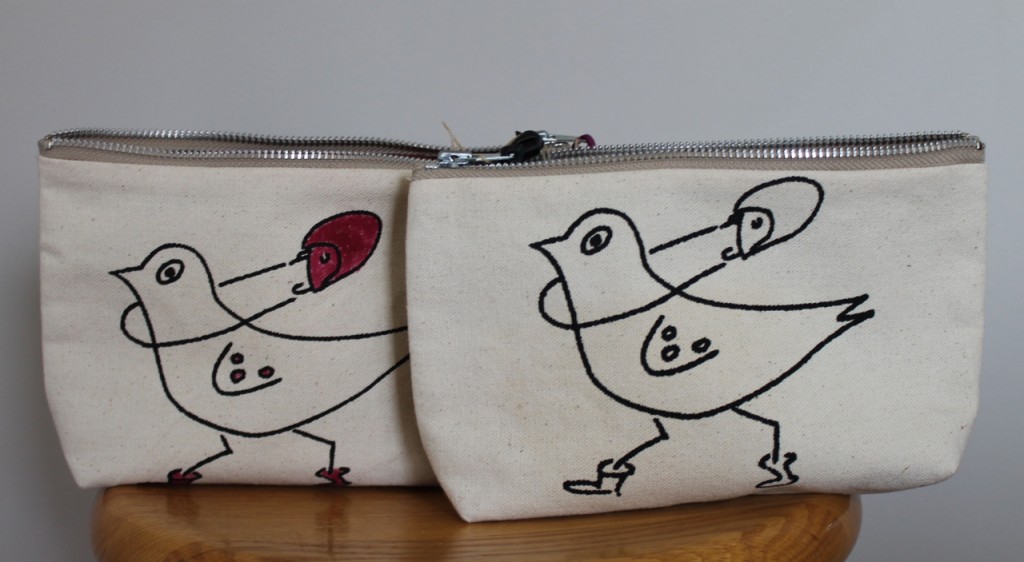 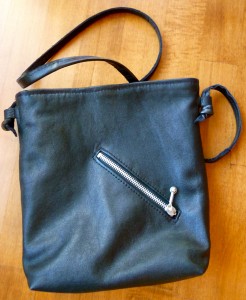 As of March 28, the blog at Birdbrain Designs will be one year old. To celebrate, I have decided to have a sale and a give-away. My remaining leather bags and pouches are all on sale. And on March 28, I will draw from all the comments over the next two weeks and the winner can have their choice of a bag or pouch.

Here is a selection of the bags available. Please leave a comment on this post for the draw and email me at xine@birdbraindesigns if you are interested in a sale bag.

I will also have bags and pouches on sale this Saturday at City Revival in Picton from 2pm-4pm. Please drop in if you have the chance. 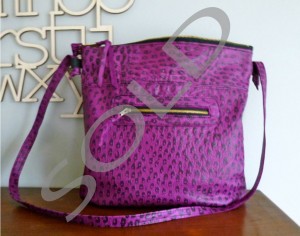 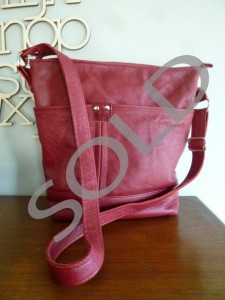 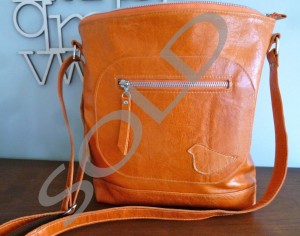 Thank you all so much for your wonderful comments.  221 people visited the page! I hope that you will continue to leave comments–it is very heartening to read your opinions and your encouragement. This is a new, somewhat unnerving adventure and I am so glad to have you accompanying me along the way.

The winner of the draw is #17, Cathlin.  My husband was barely awake this morning when I asked him to choose and number between 1 and 29 and he chose 17. Cathlin, please send me your postal information and I will pop the logo bird pouch in the mail to you.

The Etsy shop is up and running (thank you Owen for your help). Just click on the orange button on the right to visit.  There are currently 6 items in the shop. Please let me know your opinions about what you see there and what you would like to see.

I have decided to set up at Etsy store to sell my leather and canvas goods. I hope that this will happen early next week.  To celebrate this event, a large step for me, I have decided, following the example of my mentor and friend Arounna, to have a give-away.  Please leave me a comment, telling me which products you would like to see in the Etsy store and I will randomly select a winner next Friday August 26th. You may have to scroll back to look at the canvas and leather totes, pouches and bags to see what I could possibly make for the Etsy site.  The winner will receive this adorable little pouch.